Shooting with the 5D Mark II. They are laid out very well, making for a very utilitarian design whose true beauty is only discovered when you start to shoot.

However, as I say, anyone familiar with EOS design will be accustomed to this oddity. I'm far more comfortable with the power switch around the shutter button, as it is on most Nikon SLRs.

But that aside, I have to say it's all very easy to get used to. I was pleased with the detail I found in this relatively dark corner of this Smith Family Plantation house. ISO is probably the setting I change most often, and I can do it with either the rear status display, the top status display, or the LED display in the viewfinder.

I probably use each method about equally. When I need to make a change in a hurry while still composing through the viewfinder, the ISO button is easy to find on the top deck, just a half-inch behind the shutter button.

Once pressed, I just turn the Main Command dial to make the change and the numbers change in the viewfinder. When I check and make my initial settings before I begin shooting, I alternate between the other two status displays. I'm more accustomed to using the top deck LCD, but find myself drawn to the colorful display on the back. The good feature is choice and versatility, since the creative photographer often looks at his camera from several directions depending on what and how he's shooting. I think a lot more such people will and ought to make this move, but I think the caution is important. 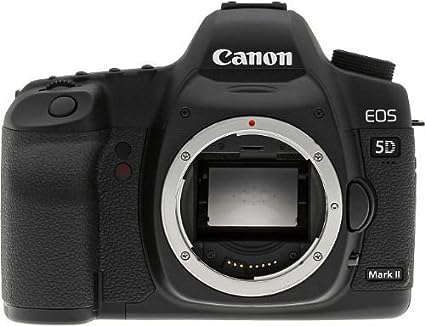 You'll have to adjust the way you shoot. It really is quite something to have a camera's AF system covering most of your frame. Even though I generally shoot with the center point, when shooting candids I will sometimes lean on Mulit-point AF systems to just make the best guess for me.

Guesses were pretty reliable with the APS-C designs, but with a full-frame sensor, you not only have more to consider in the frame overall, the existing sensors, especially the center point, cover a far smaller percentage of the subject per point. Add that the 5D Mark II's extremely high resolution full-frame sensor demands more from these lenses than ever before, and you start to see why getting focus right is so critical. The very narrow depth of field offered when shooting a closeup portrait indoors means that getting the eye instead of the eyebrow in focus will make or break a picture. I'm very grateful for the 5D Mark II's AF Microadjustment feature, because I was able to dial in several lenses before a recent shoot to ensure that my shots were indeed spot on, because I had a bad experience with the original 5D at times, especially when shooting portraits.

I was pleasantly surprised that though the depth of field in this shot was very narrow, it's right on Canon EOS 5D Mark II Digital SLR Camera eye. My first shot with the 5D Mark II illustrates the point nicely.

It's not particularly noteworthy as a photograph, but I like it all the same. Canon EOS 5D Mark II Digital SLR Camera twice to see the full-size version, and you'll see that my son's eye is the only sharp point of focus on his face, as well as the halo of his hair right within the same plane. It's a good illustration of the problem one has when shooting wide open with any prime lens, as well as the main reason one chooses to shoot with a prime lens. 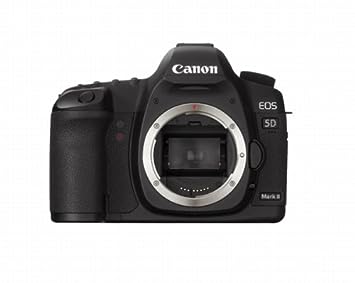 The color balance is very cold on this image, but that was accurate for the light, so it's hard to fault the camera. Also worth noting is how the image is framed a little more loosely than I normally would like. That's another adaptation you'll have to make when switching to or adding a 5D Mark II to your arsenal: I'd have done better with a mm lens for this subject, as that's about the equivalent of an 85mm lens on a Canon cropped sensor. Live View makes it possible. Framing this down-angle shot would have required a ladder and very good balance, but the 5D Mark II's live view made it Canon EOS 5D Mark II Digital SLR Camera.

Move the contrast-detect AF area to any one of the faces, and the rest was easy.

Except having to get up and down between each shot note the red face on the bearded photographer. Another good example of Live View's utility was when I shot our family portrait for this past holiday. Buy Used and Save: Buy a Used "Canon EOS 5D Mark II Full Frame DSLR Camera (Body " and save 79% off the $2, list price. Buy with confidence as.

Canon's update to the wildly popular full frame EOS 5D is here, and it's better than ever. The EOS 5D Mark II has a stunning megapixel full-frame CMOS.