Review When it comes to big-screen notebooks packing Intel's blazing Core i7 processor, Sony is definitely playing catch-up with the rest of the field. 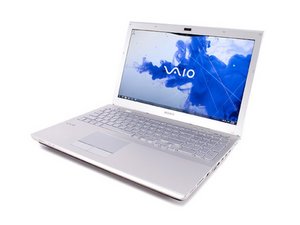 Sony also includes an innovative technology called TransferJet, which allows users to move photos from select cameras by merely placing them on the laptop's palm rest albeit with added cost and time. This multimedia machine has some drawbacks, but when it comes to performance, the F Series is one of the best Core i7 notebooks around.

The notebook has an understated matte lid embossed with the VAIO logo, and a matching chassis underneath, complete with a subtly textured palm rest. In the lower left corner of the palm rest is an icon indicating where users can transfer data wirelessly using TransferJet more on this later.

The keyboard, of course, has an island-style layout, something Sony was known for long before other PC makers jumped on board and started ditching those pillowy, closely arranged keys. Below the thick speaker strip but above the keyboard you'll find multimedia keys, as well as buttons to launch Sony's VAIO Care and Media Gallery software. The glowing green power button is still built into the side of the hinge, which Sony Vaio VPCF13XFX TransferJet an attractive touch. After 15 minutes of streaming a Hulu video at full screen, we measured temperatures of 86 degrees Fahrenheit on the underside of the notebook, 97 degrees in the center of the keyboard, and 98 degrees on the touchpad. While temperatures in the 90s are warm, we don't become concerned until they break degrees. On the bottom of the notebook--near the vents on the left side--we measured temps of degrees.

Keyboard and Trackpad We quickly took to the VAIO F's island keyboard, which combines a sturdy panel with large keys whose satin finish feels soft to the touch. We'd even go so far as to say that the keyboard is as comfortable as the famed keyboards on Apple's MacBooks and MacBook Pros. The backlighting, which turns on automatically in dim settings, is also a cool perk.

The VAIO F has a full number pad--a plus for gamers--so you'll have to get used to typing left of center on the keyboard deck. Even typing at what felt like a slow, ginger pace, we were still able to notch 88 words per minute on the Ten Thumbs Typing Tutor, which is also our high score on the office desktop we use every day. Sony got the touchpad-and-buttons combo right. The pad, which measures a comfy 2. The trackpad also supports multitouch gestures, such as pinching and Sony Vaio VPCF13XFX TransferJet.

Getting the hang of these motions took a few tries, partly because the touchpad isn't quite large enough to comfortably use two fingers at once. Also, we found that for gestures such as zooming, we had to apply a certain amount of pressure on the pad, and move our fingers at a certain speed. It wasn't difficult to learn, and the pictures on screen resized themselves smoothly; just know there's a small learning curve. As for the mouse buttons, they're easy to press without feeling too stiff or mushy. And they're large enough Sony Vaio VPCF13XFX TransferJet comfortably rest a finger there. When we watched Iron Man on Blu-ray, details such as the flames in explosions looked crisp.

On the other hand, the display didn't look as bright as others we've tested recently, such as the Acer Aspire G or Dell Studio The viewing angles from the side were good despite the glossy finish, which means various people can sit around this big-screen laptop and watch a movie together. The speakers, located above the keyboard, produced surprisingly tinny sound; when we streamed various Motown songs from Slacker, the bass notes were pretty weak.